Do you use Much and Many too much? 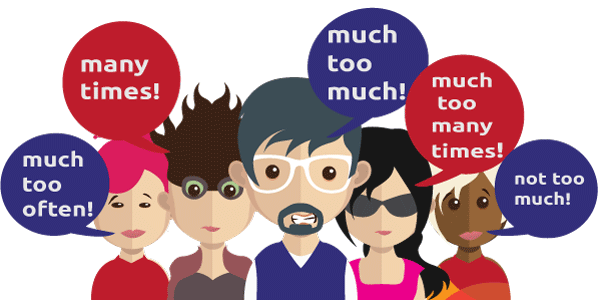 You have probably been taught to use many for countable nouns. That means you use it for things that you can count and which usually have an s on in their plural form, such as bananas or cats. You may say, ‘There are many words you can use it with.”

You might also know that much is used for uncountable nouns. So you use it for things you can’t count and which don’t usually add an s in their plural form like sugar or luggage. You might say then, ‘There’s much to learn !’

Things can, however, get complicated!

What some languages count as being countable are sometimes considered uncountable in English!

Here are some uncountable nouns that trip up many learners:

There is no plural form for these words, so you cannot use many with them – only much !

You can’t have too many homeworks, just too much homework.

If you’re feeling clever, you may remember that the plurals of certain animals do not take an s. Fish or sheep, for example. You know only too well that you should say 3 fish and that you cannot say two sheeps!

Keeping this in mind, you may be tempted to say, ‘There’s much sheep in the field’. But this is not correct!

Although the plural forms are identical to their singular forms, fish and sheep are indeed countable nouns. So you actually say, ‘there’s not many sheep in the field”.

What about staff then?

So, if you’re really switched on, you might realise that certain nouns comprising groups of people, such as staff, don’t take the s in plural form. So which do you use in this case? Much or many?

Well, the answer is many, as such groups are called “collective nouns”. That means they can be considered as a single entity – Their staff is made up of 6 women and 6 men – or a plural (made up of individuals) – I can’t see many staff in the restaurant.

To play it safe though, you can still use “members of” beforehand to be totally sure, There weren’t that many members of staff.

There are so many alternatives available that you can use instead.

Like a lot of English learners, now that you know when to use much and when to use many you may feel like using them all the time! However, there are other alternatives which sound better in certain situations.

There’s not much positivity allowed

Much and many are mainly used to form questions or to express something negative.

Were there many people there?

No, there weren’t many people at all.

You would be better in these cases to use an alternative like lots of.

‘I got on the bus and there were lots of people on it.’

You may see many and much used in positive statements. However, much of the time it is quite formal or used in literature. For example, There’s much to do in the summer in Blackpool… or There are many parking places available at the shopping centre.

If you use too (to express more/less than desired of something) or so (that there is an abundance or lack of something) the phrase sounds correct. This is because it has a slight negative meaning:

‘I got on the bus and there were too many people on it!’

‘I got on the bus and there were so many people on it!’

The same applies for much.

You could, however, say, ‘We haven’t got much petrol left’.

Confused whether you should use many or much?

If in doubt, you can just use a lot of or lots of instead of either one!

What’s more, you can use them whenever you like! You can express positive and negative situations or form questions with them!

Even if you think they are not quite as sophisticated as much or many, these phrases are used quite frequently in English. They are quite often more appropriate too.

‘They ate lots of cake.’

‘There’s not a lot of apples left.’

A great deal of

‘They don’t have a great deal of money!’

‘He’s got a great deal to say about it!’

Quite a few can be used to express many in an understated way. It is only used in positive sentences and general means that there is quite a lot of something, but not too much!

It is often used to state surprise and combined with words such as ‘actually’ or ‘in fact’.

There were quite a few people there actually!

He understands quite a few words in fact!

Similar to quite a few, a fair amount can replace much as well as many.

There was a fair amount of desert left in the end.

Enough means that there’s the right amount of something available – not too much, not too little.

There’s not enough light to see what I’m doing.

Have you got a sufficient time available?

Plenty can replace much or many to communicate that there’s more than enough of something or more than is necessary.

‘There are plenty of parking spaces available.’

English speakers would very rarely use it for negative phrases. They would not say ‘There’s not plenty of parking spaces available’ unless they were contradicting somebody else who had told them that there were.

So remember when you want to express a quantity, much of the time there are many other ways of saying many or much!

« Different ways of asking ‘how are you?’ in English.