How to really say 'hello' in English 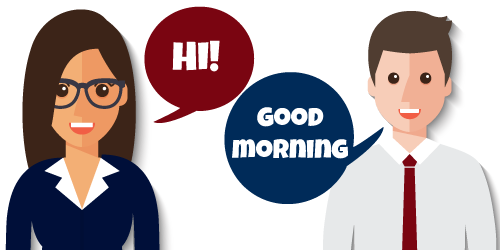 One of the first things French students are taught when they learn English is how to say ‘hello’.

Even people who don’t know much English at all, are aware that the translation of bonjour is ‘hello’. So much so that it is rarely questioned and they go on to use the word in any and all circumstances without a care in the world.

The problem is, in reality, few anglophones actually use the word ‘hello’ in everyday conversation to wish bonjour. They employ a range of other expressions instead. Read on to find out how to really say « hello » in English.

Some people even melodically sing the word to emphasise that it really is a nice morning e.g. “morn-iiing” or “even-iiing”!

In English-speaking cultures, it is normal to follow up a greeting with a swift “how are you?” This is used more often than in France and not just reserved for friends or family.

A simple “alright?” in Britain means “hi, are you well?”

In the USA, “howdy” – a favourite expression of cowboys – condenses the phrase “hi how are you” into one word. Today, however, you are more likely to hear “what’s up” or the more informal “wassup”.

In and around London, the similar greeting “watcha” or “wotcher” is thought to be an abbreviation of the old-fashioned expression “what cheer?’ It is more often than not interpreted nowadays as a way of saying, “what are you up to?’

It may come as a surprise for many to discover that “hello” is actually quite a new word. It only appeared in the Oxford Dictionary for the first time in 1827!

“Hello” became common place in the 19th century with the invention of the telephone when it became the standard greeting. Allo in French is still exclusively reserved for this purpose.

For much of 19th century Britain, the word “hullo” was actually used more frequently than “hello”, with the Germanic “hallo” also heavily employed. All three versions still exist, although “hello” is used by pretty much everyone.

Nowadays, as in Alexander Graham Bell’s era, “hello” is often used simply to get someone’s attention rather than a straightforward greeting.

« hello from the other side…”

“Hello” then is used more often than not to attract attention:

“Hello?” is often used sarcastically too if you feel like you are being ignored or neglected.

Say you’ve been waiting in reception in a hotel for ages and the two receptionists are chatting away amongst themselves as if you didn’t exist, it may be appropriate to release an exasperated « hello? »

« Hello – can someone take my order please? »

We use cookies to ensure that we give you the best experience on our website. If you continue to use this site we will assume that you are happy with it.Ok